Can You Use A Rice Cooker As A Steamer?

With the advent of modern rice cookers and their ability to steam food, cooking delicious vegetables, rice, meat, and even fish has never been easier With the simple addition of a steaming tray to the mix, it’s more fun and exciting to try delicious dishes. In this article, I explain how to use a rice cooker as a steamer and I give you some easy-to-cook, nutritious and tasty recipes you can try!

Should You Buy A Rice Cooker With A Steamer?

We know that steaming food is one of the healthiest methods of cooking, especially when it comes to meat, fish, and vegetables. So, it should come as great news to discover that one of the easiest to use cookers, the rice cooker, can also be used to create great-tasting and healthy steamed food. 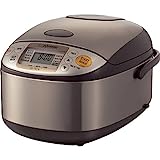 While not every rice cooker supports steaming, the majority of them are now shipped with a steamer tray, which enables you to steam vegetables, meat, and fish. And, it’s not just high-end models that have this feature, even rice cookers under $20 include a small steamer basket that fits the inner pot.

An added advantage is that you only have to use (and clean!) one cooking device for most meals-a definite boon for today’s hard-pressed housewife or busy business person.

What Food Can You Steam In A Rice Cooker?

Well, the simple answer is – almost anything. If you can steam it on the stove and it can fit into the container then there’s literally no restriction on the kinds of food you can steam in a rice cooker.

READ
Why Is Your Rice Cooker Burning Rice and How to Fix it!
Powered by Inline Related Posts

The only thing to watch is that different foods require different times to cook. For example, vegetables often cook quicker than meat so there is a manual aspect to steaming food with a rice cooker. However, as long as you work things out beforehand it’s easy to pause the cooker and add the faster cooking ingredients as you go.

One of the most common foods that I like to steam is vegetables. I just think that they look healthier, taste better, and are super easy to cook. The only thing to watch is not to overcook them as they have a tendency to go mushy in a rice cooker also, remember to peel off any thick skins on vegetables such as squash to reduce the cooking time.

Remember to peel or clean your vegetables before placing them in the steaming basket.

The rice cooker’s steamer function is also an excellent way to tenderize meat such as fish, chicken, beef, or pork.

If you are steaming meat together with the rice, then you should use a foil to seal and keep the flavors of the meat from leaking and going into the rice during cooking.

As well as meat, there’s a range of dishes that can easily be steamed in almost any rice cooker such as noodles, shrimp, and dumplings. You can even make desserts such as puddings and fruit.

How To Use A Rice Cooker As A Steamer

There are two main ways to use a rice cooker as a steamer. First of all, you can just steam the food solo or stand-alone steamer and the second way is to cook rice along with the other food. Whichever way you choose, the results will be great – as long as you check the instructions and follow them. remember, each different make and model of rice cooker have different cooking characteristics so you may need to experiment to get the optimum settings for yours.

READ
How to Cook Parboiled Rice in a Rice Cooker: a Beginners Guide
Powered by Inline Related Posts

Most vegetables usually need between 5 to 15 minutes to cook properly in a rice cooker but the actual time will depend on the vegetable in question and the amount of food in the cooker. Because they have similar cooking times, I often steam vegetables along with my rice or, if I’m going for a mixed rice dish I often just cut the veggies up and mix them through the rice before cooking. Super simple.

However, meat or fish can take significantly longer to cook. One thing you always have to be careful of is undercooking meat, especially chicken, as this can lead to serious food poisoning so its important that you maintain a cooking temperature of 165 F and cook until the meat turns white (and the juices run clear). Most beef and pork joints can be cooked at 145 F but again, either cut the meat or use a fork to ensure it’s cooked all the way through.

Better still, get a hold of a meat thermometer and use that to monitor the temperature and time to ensure the best possible cook.

If, like me, you like to cook but struggle to find the time, then combining a rice cooker with a steamer can bring loads of benefits.

Like most things, despite the significant upsides, there are, inevitably, a few downsides that I have noticed when using my rice cooker as a steamer…

Is A Metal Steamer Better Than A Plastic One?

Lots of people are concerned about the materials used in their rice cookers—and rightly so. After all, these materials are in contact with the food you will be eating, so it makes sense to do your homework and ensure that no harmful chemicals or compounds could be released by the cooking process. Of course, there’s also the question of performance and taste; so, which material is better, metal or plastic?

It has been well known for some years that some plastics can impose a serious health risk, especially polycarbonate plastic, which can leach BPA into your food.

Although you can now buy BPA-free plastic steamers, generally speaking, they aren’t as safe as metal ones, so that’s why I prefer to use a metal steamer tray. No point in messing around with your or your family’s health for the sake of a few dollars.

As an added bonus, I find that my metal steamer gets a bit warmer, which makes the food that little bit crispier and, at least for my taste, makes it better.

Here’s a quick and tasty steamed chicken recipe thats easy to create in your rice cooker.

Your rice cooker is already a very versatile instrument but, with the addition of a simple steamer tray, it becomes a one-stop kitchen. Food steamed in your rice cooker tastes great, maintains its goodness and is easy and clean to cook. You really can’t ask for much more.

Since most modern rice cookers now come with a steamer tray there’s really no excuse for not trying this great cooking method. I hope you have taken inspiration from this post and enjoyed a new way of cooking with your rice cooker.