How To Cook Porridge In A Rice Cooker

At this time of year with the crisp Autumn mornings, it’s so important that we have a hearty filling breakfast – especially for the kids. So, it’s a great time to be thinking about one of the most nutritious, filling breakfasts you can get – porridge. In recent years, porridge has enjoyed a resurgence in popularity and, whereas in the past it used to be considered bland and boring, often eaten with salt or sugar and a splash of milk, these days people are adding cinnamon, apples, blueberries, and even honey to spice it up a bit. I think it’s delicious – and it’s very healthy.

Porridge is made by boiling ground, crushed or chopped starchy plants such as rice, barley, corn (maize), oats, and wheat. Porridge can be eaten with toppings like sugar, butter, honey, syrup, and fruit. Some types of porridge include steel-cut oats, oatmeal (Irish or rolled), cream of wheat, and quinoa. What kind do you like? 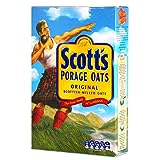 But did you know that you can actually cook great-tasting porridge in a rice cooker without the hassle and mess of the traditional stovetop method of cooking?

Well, you can, and I’m about to explain how to do it.

Yes, it is, there I said it! Most people think that porridge is just oats soaked and then boiled – and if that’s how you eat it then no wonder you think it’s boring!!

Whereas many people enjoy it this way – in Scotland you may well be shot for eating it any other way – most of us like to add extra ingredients or put some toppings on – and this opens up a huge number of possibilities. In fact, it’s not unknown for me to make porridge into my main meal of the day.

But, whether you want it for a hearty breakfast, a tasty lunch, or sweetened gourmet-style for dinner – porridge can fit the bill.

And, did I mention that it’s super-healthy? Because it’s made primarily from oats, it’s great for digestion and is full of fiber – just what we need these days. Of course, it’s not just oats – look at some of the different ways its made around the world:

However, no matter what base ingredients you use, there’s one thing that all good porridge grains have in common – they should have a thick texture and be high in starch.

But, before I go on, let’s put one thing straight.

There’s been a real upsurge in the number of microwaveable porridge products on the market. These are usually pre-mixed sachets or pots of porridge with a filling or topping and can be cooked in a few minutes by adding milk and placing them in the microwave. There’s no doubt they are handy – and I eat them as well – but there’s nothing quite like the taste and texture that you can get by cooking from scratch – and that’s why I always prefer to make my porridge in a rice cooker.

How to Cook Porridge In a Rice Cooker

Luckily, cooking porridge in a rice cooker is about as simple as it gets.

But why use a rice cooker? Why not use a pot or even a slow cooker? Well here’s my take on it:

A rice cooker, on the other hand, is the most convenient way to cook porridge. Because a rice cooker is more of a set-and-forget device, its usually just a case of throwing the mix in, pressing a button, and going away to get ready for school/work/have a long lie 😉

READ
What is a Rice Cooker?
Powered by Inline Related Posts

Another thing I like about cooking porridge in the rice cooker is that it cooks like a slow cooker and so the taste is better but it works for any quantity from a single bowl to a large family meal whereas slow cookers work best for larger batches.

The best way, I find, to cook porridge is to prepare it the night before. put it into the rice cooker and set the timer – this is pretty much standard on most rice cookers – and you can wake up to delicious hot porridge first thing in the morning. Or, if your cooker is a budget version you can still cook it the night before and leave the porridge in overnight on keep warm mode. Just be sure to add a bit of extra milk to the mix to prevent it from drying out overnight.

It doesn’t matter what grain you use, a rice cooker works well with any type of grains, even the notorious difficult steel-cut oats.

How I Make Porridge In a Rice Cooker

There are a couple of factors to take into account when cooking porridge – what consistency are you after (thick or thin) and what grain will you be using.

Since I grew up in an Asian household, I was used to eating porridge made from rice and the variety of choice was Jasmine rice. It’s great for porridge because its git a high starch content and so comes out nice and creamy. This kind of porridge is still eaten across a lot of Asia and is known as Congee. It’s delicious and I highly recommend that you try it.

Here’s how I cook rice porridge using a rice cooker:

The process for cooking porridge using oats is almost identical except you can add milk instead of chicken stock for a rich, creamy consistency. Porridge made with oats is, in my opinion, a bit blander than rice porridge so I normally add some sugar or honey after it’s been cooked.

Tip: If you let the porridge cool its forms a lovely skin that can hold honey or soft fruits such as strawberries or blueberries. Nuts are also great for a high-fiber, high-energy breakfast.

Should You Soak The Rice?

I know a few people who like to soak the grains first. That’s fine but, personally, I don’t bother. It does reduce the cooking time a little though, so remember to adjust your cooker accordingly. For oats-based porridge you should definitely soak the grains – I recommend leaving them overnight as they will absorb a lot of water and cook faster.

That also applies if you are using brown rice or red, and black rice.

So hopefully, I’ve managed to convince you that a rice cooker is a great way to cook porridge and that there are several kinds you can make. Whether it’s tasty rice porridge or a super filling and healthy oatmeal porridge, it’s very easy to make and, because you can pick up a rice cooker for under $20 – it doesn’t have to be expensive either.

So, go on, fire up your rice cooker and start eating some of the healthiest food you can find.

Thank you for reading